Gooseberries galore at the shows 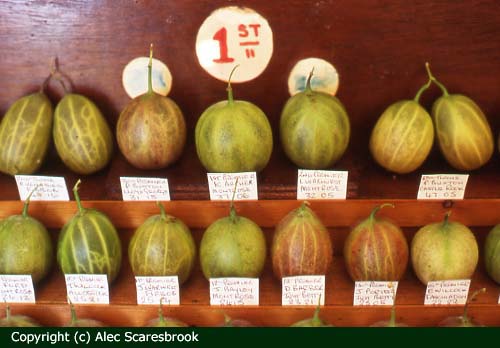 The end of July and beginning of August see the gooseberry shows – the culmination of the year for the gooseberry societies of Cheshire and Yorkshire. Members carefully nurture their fruit bushes all year, with the last few weeks spent anxiously protecting the berries from damage by birds and wasps, which will exclude them from the show.

The exhibitors’ sole aim is to produce the heaviest berry in its class. Every year, in clubs, pubs and marquees, the berries are weighed off against each other on beautiful brass balances. The heaviest in each class is then accurately weighed using Troy weights and given its pride of place on the winners’ display shelves.

Gooseberry shows are all about tradition, and the ritual of weighing the berries against each other (weighing off) continues as ever. Using a pair of scales, berries are compared, the heavier one retained, and the next entry balanced against it. Presumably this simplified the process as there was no need to find and then write down the weight of each entry. 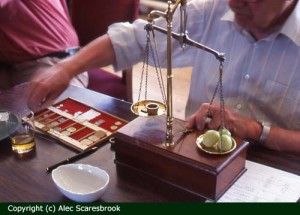 It’s a slow process with so many classes (colour, single, twin, triplet, multiple and plate), but as one competitor commented, ‘Why rush? If it takes all year to grow them, you may as well spend a few hours weighing them.’

The night before the show, competitors pick their best berries with a witness on hand to ensure that none are weighed.

Fruit with dry cracks or splits are allowed, but those with wet damage are not. The berries are boxed, the string tied around, and the knot sealed with wax.

Once at the show, the seals are inspected before the string can be cut, and the judging begins, with waiters taking berries from competitors to the weigher. The heaviest berry in its class is then weighed, a record made, the berry snubbed and placed on the winners’ stand, where it’s left on display behind glass for the next week.

Exhibitors take their own scales so that they can compare weights of their own and neighbours’ berries, to decide which to submit for each class.

There are no residency rules for membership of gooseberry societies, so anyone can try their hand at growing and showing. Read up on growing tips for showing in the Plants section of this website.

Ignored by the wealthy

Gooseberries were the Cinderella of the kitchen garden on the grand estates, but were keenly cultivated by cottage gardeners of the time. In particular, handloom weavers (already renowned for breeding potatoes and florists’ flowers) turned their attention to gooseberries, where there was a lot of scope for boosting berry weight. This was their all-consuming passion, achieved by identifying the ideal growing conditions, and nurturing new and established varieties.

In Cheshire, Lancashire, parts of Yorkshire and the Midlands, gooseberry societies were formed by the weavers with the aim of holding annual shows. The first gooseberry register (of 1786) listed most of the shows along with the weights of the winning berries recorded in pennyweights (dwts) and grains. Winning weights (of 10dwt) were around twice that of wild berries. By 1825, the weights had crept up to 32dwts and by the 1850s a record-breaking berry weighed in at 37 pennyweights 7 grains (2oz, and 7 1/2 times the weight of a wild berry), not to be beaten until 1978 with 37dwt 15 grains (usually written as 37.15). The record now stands at 39.19, which was achieved in 1993 by Kelvin Archer with ‘Montrose’, resulting in his entry in the Guinness Book of Records.

Changes over the years

The huge number of shows (171 registered in 1845) has now diminished to 11 (10 in Cheshire and one in Yorkshire that was started in 1800). Prizes have changed too, from copper kettles or brass pans to money and an engraved trophy. And although the Cheshire societies have retained the old troy units of pennyweight (dwt) and grain, Egton Bridge changed in the 30s to avoirdupois units of drams and grains. For those of you who can’t visualise these old units, a pennyweight (divided into 24 grains) is 1.55g (1/18oz) and a dram (equivalent to 27.34 grains) is 1.77g (1/16oz).

Shows are held at pubs or licensed clubs, which isn’t surprising when you discover the old rules that required a minimum sum (from 6d to 2/6d) to be spent on refreshments during the show. The minimum-spend rule was dropped long ago, but new rules pop up. In 1961, nine gooseberry societies formed the Mid-Cheshire Gooseberry Shows Association to prevent duplicate showing and prize winning, with the rule that winning entries are snubbed (ie the flower remains cut off) so that they cannot be entered elsewhere.

With little commercial interest in producing new gooseberry cultivars, it’s down to the gooseberry association members to introduce new blood. One Cheshire grower, Frank Carter, has bred many that have gone on to win for their growers, including ‘Montrose’ that Kelvin Archer has had so much success with.

‘You need patience and a big garden for growing on seedlings and for producing winning berries,’ Frank Carter told us, ‘and luck.’

He added, ‘It’s a problem breeding gooseberries because the flowers are self fertile, and insect pollinated, so it’s difficult to control. But seedlings have far more vigour than cuttings so it’s worth doing. It takes at least two years to know whether the seedling is any good, with berries having to weigh at least 25dwt to be acceptable.’

If the berries make the grade, and are sufficiently different from existing varieties, the grower is allowed to name it and enter it in the shows.

Where to see and buy

Kelvin Archer’s winning plants – in the kitchen garden of Rode Hall, Cheshire, which is open to the public on certain days.

The more common cultivars (‘Leveller’, ‘Careless’, ‘Whinham’s Industry’ and ‘Invicta’) are easily tracked down at garden centres and fruit nurseries.

For other cultivars, look in the RHS Plant Finder for sources, including the following:

This website uses cookies to improve your experience while you navigate through the website. Out of these, the cookies that are categorized as necessary are stored on your browser as they are essential for the working of basic functionalities of the website. We also use third-party cookies that help us analyze and understand how you use this website. These cookies will be stored in your browser only with your consent. You also have the option to opt-out of these cookies. But opting out of some of these cookies may affect your browsing experience.
Necessary Always Enabled
Necessary cookies are absolutely essential for the website to function properly. This category only includes cookies that ensures basic functionalities and security features of the website. These cookies do not store any personal information.
Non-necessary
Any cookies that may not be particularly necessary for the website to function and is used specifically to collect user personal data via analytics, ads, other embedded contents are termed as non-necessary cookies. It is mandatory to procure user consent prior to running these cookies on your website.
SAVE & ACCEPT