Written by Alec and Val Scaresbrook for Water Gardening magazine and published in 1996.

When the family are debating where to go for the next holiday, and are clamouring for the usual attractions of sun, scenery and maybe sand and sea, gardeners needn’t despair. After all, Britain has such a variety of attractions that gardens are bound to feature somewhere nearby for you to escape to. And with such beautiful gardens open to the public, it’s quite likely that the family will want to accompany you.

One traditional holiday resort that fits the bill is Ilfracombe. The Victorians knew a thing or to about weather, and their resorts boast plenty of sunshine during the summer. And a profusion of hotels and guesthouses in the town allows you to choose accommodation to suit your pocket. From your base you have the choice of beach or rolling countryside containing superb gardens.

A knowledgable local told us about Marwood Hill.

‘Everyone loves the garden. It’s open all year round and there’s always something colourful to look at, whatever the season. In autumn the leaves on the trees are turning, then in winter there are the different colours of tree bark.’

He continued, ‘Camellias and magnolias begin flowering in late winter and early spring and of course there are bulbs flowering whatever the season. The rhododendrons and azaleas give a spring display, and there’s hydrangea and cherry too. Now, in July, there are too many plants in flower for me to list, but my favourites are the Japanese irises. There are three lakes too, all with carp, some of them Koi. ‘

Even after hearing such a glowing report, we were not prepared for such a spectacular garden. Having arrived by the old walls of the vicarage garden, we strolled to the garden entrance set between an open fence smothered in roses. A narrow path led us down a slope, around the edge of the walled garden, where Dr Smart, the garden’s creator, holds the fort from the potting shed.  [amendment to original article: Dr Smart died in 2002]

We emerged on a terrace planted with formal beds of billowing summery flowers and, anxious for some shade on a blisteringly hot day, made a beeline for the trees shading the edge of the lakes. These lakes are shallow, the result of damming the stream running through the valley in 1962, and the home to many carp, including mirror and crucian, originally introduced about 15 years previously as part of research project into the potential of carp production for food. The project folded but the fish live on. 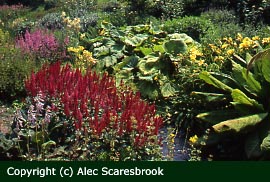 There’s also enjoy a bog garden of impressive proportions, which was created in 1977 along both sides of the stream flowing from the lower lake. Later, another dam was built lower down the valley to create a third lake, which is where some Koi are to be found. But all the fish are difficult to spot through the murky water, with the best chance of seeing them being by feeding the numerous ducks. As the birds rush over, the fish surface to snap up the surplus bread.

The original stock of Koi were bought about 25 years ago and have bred in some years, but don’t lead pampered lives, being left to forage for themselves, topping up their diet with bread thrown for the ducks by the many regular garden visitors. The lakes have gradually silted up with time so that they are now quite shallow, but access is so restricted for machinery that dredging isn’t an option. However, despite the shallow water, the fish are safe from herons, probably because most of the water’s edge is planted and prevents them from wading in.

With something to please most gardeners, we enjoyed our tour around the gardens, which, despite being so popular, manage to retain a tranquil atmosphere. There are plenty of seats to encourage you to linger, enjoy the vistas and study the planting schemes – and there are plenty of ideas to take home; plants too, on sale in the plant centre.

Our visit was at just the right time to see the astilbes and Japanese irises at their best. Dr Smart assembled national collections of both of these Oriental plants here and planted them in spectacular groups in different parts of the garden.

The feathery plumes of red, pink, purple and white astilbes light up the borders surrounding the lakes and add to the party-frock colours of the broad bog garden.

Altogether there are about 120 cultivars of various species grown here. Most need the moist conditions provided by a bog garden or a well-watered and mulched soil, although Astilbe simplicifolia and A. chinensis can tolerate drier conditions. Fortunately these are some of the smaller astilbes, growing only 18-30in high, so are suitable for small gardens – whatever the size of garden, for best results, astilbes should be planted shallowly, and dug up and divided every three to four years.

Around 100 different Japanese irises (Iris ensata, sometimes sold as I. kaempferi) are scattered throughout the boggy areas but the best display we found were in a hidden clump clustered around the last lake’s outlet.

The combination of velvety purples, pastels and whites brightening the streamside were an unexpected sight. As their growing site indicated, they need moist soil and a sunny spot to thrive.

As we continued our stroll around the valley we could see that there would be plenty more delights to savour in the months to come. Our local was right – there’s plenty here to enjoy, whatever the time of year.

This website uses cookies to improve your experience while you navigate through the website. Out of these, the cookies that are categorized as necessary are stored on your browser as they are essential for the working of basic functionalities of the website. We also use third-party cookies that help us analyze and understand how you use this website. These cookies will be stored in your browser only with your consent. You also have the option to opt-out of these cookies. But opting out of some of these cookies may affect your browsing experience.
Necessary Always Enabled

Any cookies that may not be particularly necessary for the website to function and is used specifically to collect user personal data via analytics, ads, other embedded contents are termed as non-necessary cookies. It is mandatory to procure user consent prior to running these cookies on your website.